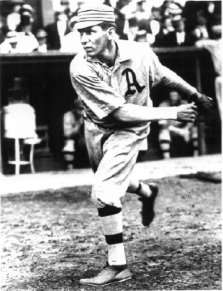 This ad from 10/13/1913 promotes an upcoming game featuring future Hall of Famer Chief Bender and battery mate Wally Schang against the Danforths on A. J. & G. Park.

Most baseball historians agree that Wally Schang was the greatest offensive catcher of the dead ball (pre-1920) era.

When Schang wasn’t catching, his managers usually played him in center field, right, or at third base, in order to keep his bat in the lineup.

His defensive work was also regarded as outstanding, although he holds the American League career record for most errors by a catcher, with 218

This article dated 10/13/1913 promotes an upcoming game featuring future Hall of Famer Chief Bender, a 212 game winner, is credited with „inventing‟ the slider in 1910 and was referred to by Ty Cobb as the „most intelligent pitcher I ever faced‟.

The Danforths recruited MLB’s Jimmy Esmond, Cincinnati Reds to play on their team and tried to George Burns, local MLB star, to play for them!

“Our team will arrive in Gloversville before lunch tomorrow morning and will register at the New Windsor.”

This is the telephonic message Manager Lake received from Booking Agent Driscoll last evening, thus assuring that the All-Star team will surely be here and that there will be no delay in starting the game at 2:30 as scheduled. Driscoll also assured Manager Lake that he would have and exceptionally fast team of American and National League s to support the World’s series champion battery. Chief Bender and the marvelous young backstop, Schang, in the game at J. & G. park this afternoon.

Never before have the local fans had a chance to see a team of this kind on the local grounds and it is safe to say that it will be many a season before a team of the world’s greatest baseball players appear in this locality again.

Greenslete p:
Holmes, c:
Arnoid, 1b:
Madden, 2b:
Jimmy Tamsett, of Albany, ss:
Jimmy Esmond, the phenomenal young third baseman of the Cincinnati National league  team at 3b:
Sandner, rf:
Van Slyke, cf:
Connelly, lf:
An effort is being made to have George Burns, the sensational left fielder or the New York Giants appear in a Dansforth’s uniform. Burns home is in St. Johnsville and is reported to be at home at present. Should this be possible Manager Lake will have the fastest local team that has ever represented the city. Manager Lake does not guarantee the appearance of Burns but will have him if possible.

Seldom has there been so much interest taken in a baseball game as that displayed in the game this afternoon. On the street and in the factories and club rooms this game is the general subject and Lanager Lake is receiving congratulations from the fans for his efforts to bring the greatest there is in baseball to the city. The game will be called at 2:30 sharp in order to allow time for a full game before the chill of the evening sets in, and no doubt the biggest crowd in years will be in attendance.

BENDER’S TEAM IS UNABLE TO SCORE

GLOVERSVILLE, Oct. 13 – A fair sized crowd, considering the threatening weather, here Saturday, saw the Dansforths and Bender’s All-Stars play eight and one-half innings of good baseball only to be halted by rain with both sides unable to score. It had been announced that Bender and Schang, famous world’s series battery, would perform for the visitors but before the game a telegram was received saying that Schang would be unable to appear, so that Jacklitech, a Rochester International League catcher, did the receiving. Bender pitched the first four innings and easily kept the Dansforths from securing but one scratch hit. Doescher, Jersey City International League pitcher, finished the game and shut the Dansforths out without a hit. Bender struck out four men.

The Dansforths were strengthened for this game by the addition of Tamsett, former Albany State League manager, and Esmond, former Cincinnati and present Montreal infielder. Tamsett wa the only Dansforth to secure a hit which was the scratch order. Greenslete was the bright star of the Dansforths and although a bit wild, allowed but four hits and struck eleven men. Chief Bender fell victim to his curves for four consecutive times. THis greatly pleased the fans as Bender struck out twice when a hit or even a long fly would have meant a winning run. Greenslete pitched himself out of some bad holes in the fourths and seventh innings. In the fourth with one hit and a man on second and third, he struck out Dalton and forced Robertson to hit a weak grounder to Tamsett who easily threw him out at first. In the seventh there were again men on second and third with but one out, but Greenslete struck out Robertson, walked Jacklisch and struck out Bender. All four of the All-Star hits were scattered, no two coming in the same inning. The game was called in the last half of the ninth  through the fact that the weather had changed from a mist to a steady downpour.