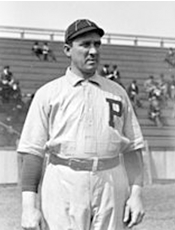 William Wilson “Bill” Hallman (March 31, 1867 – September 11, 1920) was born in Pittsburgh, Pennsylvania, and was an American Major League player, who played for six teams in 4 leagues during his 14 year career, including one stint as a player-manager for the 1897 St. Louis Browns.

He was the uncle of Bill Hallman, an outfielder for four seasons.