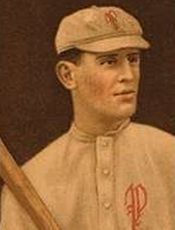 Born in Lewiston, Maine, Downey played on several baseball teams after his first professional appearance at age 25
on May 7, 1909.

He both batted and threw the ball with his right arm.

Downey, who was five feet 10 inches and weighed 178 pounds never had any higher education, and died in Passaic, New Jersey