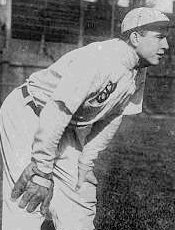 Nap Lajoie, who was Birmingham’s former manager,  struggled through a hitting slump in mid-season and Birmingham decided to bench the future Hall of Famer at one point.

Lajoie who had no love for Birmingham was outraged and cursed out the young manager to his face and in the press.

His next season would be a disaster, as the Naps lost 102 The A.J.&G. Baseball Club were champions in 1905 and boasted a great lineup full of stars in their inaugural season in their new Park.