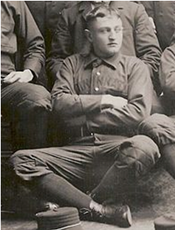 He began his career as a pitcher for the Cincinnati Red Stockings, leading the AA in earned run average in 1887, then switched to playing the outfield when he began playing for the Pittsburgh Pirates in 1892.

He returned the Reds for three seasons from 1898 to 1900, and then played one partial season with the New York Giants.

He appeared in four games for the Pirates in 1901, then finished the season, and his career, with the Boston Beaneaters.