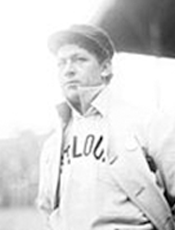 After his major league career, he was involved in a scandal involving possibly throwing a game for money, and committed suicide.