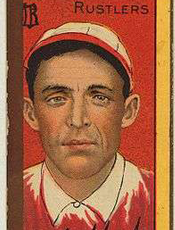 Bayard Heston “Bud” Sharpe was a first baseman and outfielder.

He played Major League baseball in parts of two seasons-1905 and 1910.

Sharpe was born on August 6, 1881 in West Chester, Pennsylvania.

He batted left-handed and threw right-handed.

He played for the Scranton Miners in 1906.