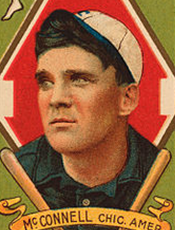 McConnell played minor league baseball for three different teams until August 1907, when he signed for the Boston Red Sox.

After making his debut the following season and spending three seasons with the Red Sox, McConnell was traded in the middle of the 1910 season to the Chicago White Sox, where he spent the next two years of his career before playing his last game on October 8, 1911.

McConnell is most famous for hitting into the first unassisted triple play in Major League Baseball history on
July 19, 1909.