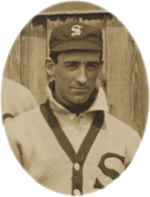 Archibald Wright “Moonlight” Graham appeared as a right fielder in a single major league game for the New York Giants on June 29, 1905. His story was popularized by the 1989 film Field of Dreams starring Kevin Costner.

On June 29, 1905, the Giants were the visiting team against the Brooklyn Superbas at Washington Park. For the bottom of the eighth inning, Graham was sent in to play right field. In the top of the ninth inning, Graham was on deck when Claude Elliott flied out, resulting in the third and final out. Graham played the bottom of the ninth in right field but never came to bat. That game turned out to be his only appearance in the major leagues.

After playing in the minor leagues through the 1908 season, Graham completed his medical degree from the University of Maryland in 1905. He obtained his license the following year and began practicing medicine in MN

These articles, dated 7-17-1907, from the Amsterdam Evening Recorder and the Rome Daily Sentinel confirm the game in Gloversville featuring Doc Graham with the Scranton Miners. Box scores of the era were not consistent on placing the home team on the bottom, so double proof was needed

Visit NBCNews.com for breaking news, world news, and news about the economy