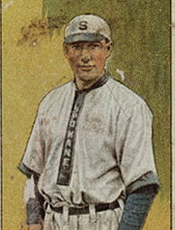 In 1912, Zimmerman led the National League in batting and in home runs, but failed to win the triple crown, as Honus Wagner led the league in RBIs.

He was also an important member of the 1908 Cubs, the last Cubs team to win the World Series. Zimmerman was #98 on the “Top 100 Cubs of All Time”

Zimmerman was suspended from the New York Giants in 1919, along with his friend Hal Chase for allegedly attempting to convince other players to fix games. Some suggested that the Giants’ loss to the Chicago White Sox in the 1917 World Series may have been partial motivation for Zimmerman’s suspension. Zimmerman batted .120 in the Series.