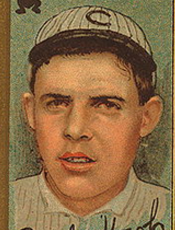 He played for the Boston Braves, Boston Red Sox, and Chicago Cubs.

He is generally credited as the player who got the ball into the hands of Johnny Evers in the famous Merkle’s Boner
game.

He played for the Albany Senators in 1906.